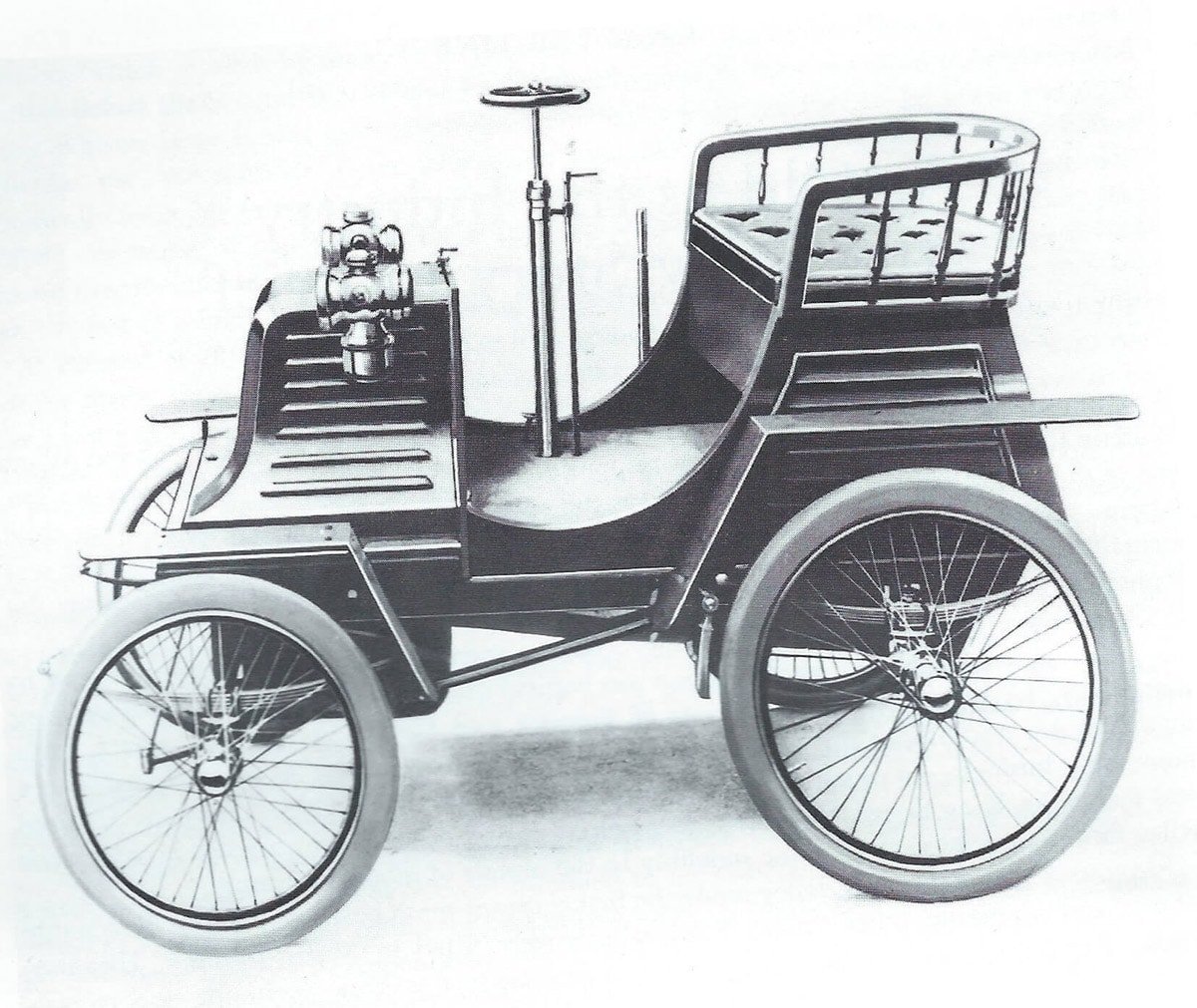 Riley’s trusty adage “As Old as the Industry, as Modern as the Hour” may be a fond utterance of many….and for good reason. Riley’s first four-wheeler lived up to – or even set – both of these standards; designed and constructed around the genesis of the automobile, while pioneering technology still seen today – a century and a quarter later.

Percy Riley, third of William Senior’s five sons, single handedly commenced production of this, the company’s first motorcar, in 1896. He had spent the previous 3 years designing the vehicle. His father strongly disapproved of the notion, yet begrudgingly let the 16-year old Percy build the car at the family’s works.

The car was classed as a “Voiturette” – to the French, this word was used to describe a miniature automobile.

The design was adapted from that of a horse-drawn dog cart – with a front axle and engine replacing the horses. Suspension was by a longitudinal spring at each corner; elliptical at the front, and half elliptical at the rear. The car was maneuvered by a steering wheel on a vertical column, at a time when the majority of automobiles utilised a slightly archaic tiller-based steering system. One may surmise that Percy would have had his car ride on wooden wheels, as would be customary for the time. Alas, the voiturette employed spoked metal wheels shod with beaded edge tyres.

It is certainly worth noting that some features of this car were truly ‘of its time’. Take, for example, the fact that the drive was transferred to the rear wheels not by torque tube, but by leather belt! Oh, and not to mention the fact that the only means of braking was by pulling a lever which applied a wooden chock to each rear wheel.

It is also worth noting that this car was truly unique. It wasn’t a production car, but an experimental prototype built by a young visionary. It was a harbinger of the brilliance that would come from Percy Riley and his brothers.

Production on the car was finished in 1898, when Percy was eighteen. At the time, it was only the second automobile in Coventry. Its maiden voyage was a drive from Coventry to Stratford upon Avon, undertaken by Percy and his older brother Victor.

As chronicled in a report published in the Autocar in 1900, Percy spent the previous year improving his creation. He updated its ignition and carburation. It is also thought that the car’s advanced mechanically operated inlet valve was incorporated at this time, replacing a vacuum operated system initially fitted.

Certain photographs taken by Riley depict the car with a number plate – as these were introduced in 1904, it would be fair to say that the voiturette stayed with the family until at least around that time. The car’s last known whereabouts, however, were in 1909. An advert placed the car in Belfast. The description of the car matched Percy’s voiturette completely, except from a mention of the car having a tax horsepower of 5 ½, rather than 3 ½. The reasons behind this are purely speculative – it could be anything from a misprint to the engine in the car having been changed completely.

Despite the original car fading into the mists of time, we are very lucky to be graced with the presence of an exact replica. Commissioned by the All Riley Clubs and the Riley Cars Heritage Trust after many years of fundraising and campaigning, its build began in 2014. Most of the work was undertaken by master fabricator Philip D’archambaud under the expert guidance of Geoffrey Haviland, who had researched the car extensively over many years. Using the period photographs, scaled drawings had been created of the car. These certainly came in handy during the voiturette’s build.

After rolling out of Philip’s works, the car made its first professional debut at its launch on the 6th of November 2019 at the Coventry Transport Museum. None other than Victor Riley Jr, nephew of the original car’s creator, was in attendance. Next, the car was taken to the National Exhibition Center, Birmingham where it appeared on the stand of the Riley Motor Club at the Classic Motor Show from the 8th – 10th of November.

After sitting proudly at the NEC, the car took up residency at King Henry VIII School in Coventry, the very school that Percy Riley and his brothers were educated at. It stayed here until February 2020, whereupon it returned to Philip’s works.

As of the time of writing, the car has not yet its own method of propulsion. However, it is hoped that this tide shall turn – and when budget allows, it is planned that a working recreation of Percy’s 3 ½ HP engine with mechanically operated inlet valve shall be fitted to the miniature automobile. Watch this space, folks.